FREE DOMESTIC GROUND SHIPPING ON ALL ORDERS OVER $50! EXPEDITED SHIPPING ALSO AVAILABLE FOR A FEE.

been a part of our lives, however you may not have expected to see it where you have. Luminescent objects come in all kinds of forms; whether it’s in the form of firefly’s, or the red tide where the sand lights up from certain enchanting bacterial life. One thing that you may not have seen over the years is controllable luminescence, which is what we will talk about in this article.

In 1936 George Destriau, that zinc sulfide compound emitted light in the presence of an electric field. That was essentially the first discovery of our modern day “EL” phosphor. Years later in the 40’s and 50’s, a substantial amount of research was carried out on various phosphors that could illuminate radar screens all the way to modern day tube televisions. Also during that time, transparent coatings for de-icing systems for military aircraft windshields were created. These transparent coatings played an integral part in today’s LCD (Liquid Crystal) Displays .

So back to EL Lamps – How do they work? EL (Electroluminescent) Lamps are a loose parallel-plate capacitor, which basically means it is an electronic device that is electrically charged, but loses its energy in the form of light, rather than heat like other lighting and electronic sources. To do this, an EL Device requires an AC current which is applied to both parallel plates. The AC current allows a buildup of energy between the plates inside the phosphor layer. When the energy is released, it excites the phosphor particles throughout each half cycle of the AC current. If that doesn’t make any sense, think about a ping pong match. Each time the ball goes over the net, it’s similar to the electronic fields changing directions (frequency). In our analogy, the net would be covered in phosphor, and each time the ball went over the net, the net would release light. The faster the ball went back and forth, the brighter the net becomes. We measure this frequency (back and forth) in Hertz (Hz), and typically EL Lamps glow between 600 and 2000Hz. That’s extremely fast! 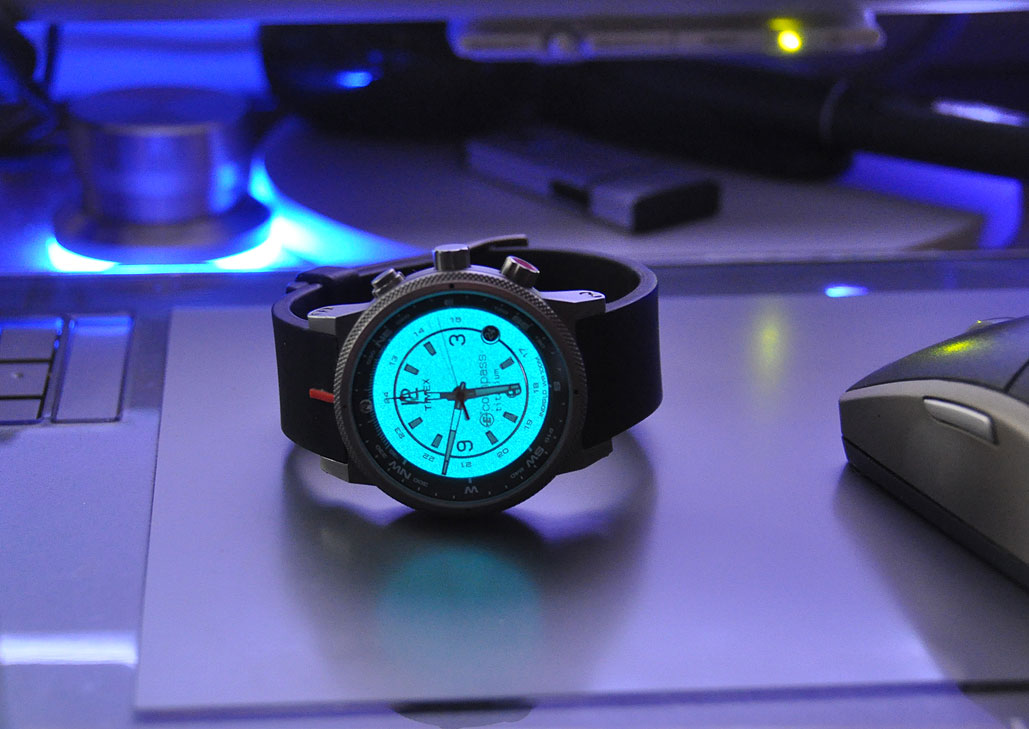 So in lumens, how much light does EL produce? EL is typically not measured in lumens, due to its properties. Electroluminescence is more of a passive light source, so if you shine a flashlight at the lamp, you won’t see any sign that the EL device is on. We typically measure Electroluminescence in Footlaberts, or candela per square meters. If a typical Indiglo watch (that’s EL, BTW!) has 1 footlambert (or 3.5candela/sq m), this brightness is more than enough to read the face of the watch. You’ll notice when you turn on the indiglo watch in broad daylight, the visibility of the EL glow is pretty much non-existant. But at night, it provides a beautiful glow that is visible from a long distance.

What color is EL? The natural color of our typical high-bright phosphor is a teal blue color, however changing the voltage and frequency of the lamp can also change its hue. This is important because if a certain color is needed for a particular application, this color needs to be addressed right from the beginning. Nearly any color can be produced using EL, however instead of different colored phosphors, we typically will use a semi-transparent overlay which will mask the color of the teal-blue phosphor and give you a new color. For instance, if you have a bright green overlay, the teal-blue lamp will now look a magnificent lime green!

Inverters – What are they and how do they work? An inverter (we like to refer them as battery packs) take an existing electrical charge, like 3V, 12V, etc and ramp up the voltage to about 100V and throw in a high frequency (around 1000Hz). This delicate balance between voltage and frequency help illuminate the phosphor particles and make it glow.

The world of EL technology has been growing rapidly over the past decade, thanks to Hollywood performers, like Daft Punk. Iconic movies like Tron Legacy and many stage performances today all incorporate accents of EL Technology when no other lighting source will do. As more uses are discovered for the technology, come new enhancements, uses and totally cool products. Be on the lookout for Electroluminescent products over the next decade for some really cool stuff.o them as battery packs, DC or AC inverters) simply turns the DC electricity into AC electricity and is used to increase the frequency of AC electricity (think ping pong). DC (Direct Current) is electricity that is pretty much constant with time (at least over intervals or interest); the voltage is basically constant for a short time interval. AC on the other hand, means Alternating Current and is used to describe electricity which fluctuates periodically within a regular rhythm at a given frequency. Power coming from a wall outlet is AC and in the US at least, it has a frequency of 60 cycles per second (Hz). If you were to plug an EL Lamp directly into the wall without an inverter, the 60Hz cycle would be far too low that the EL device would not light up at all, or be extremely dim. A proper voltage and frequency for all EL devices are important not only for the proper glow, but also to ensure a long lasting lamp. Typical EL phosphors today last approximately 4,000-6,000 hours, and with certain frequencies, can last up to 10,000 hours.