Be the first to review this product
Electric Optics EL Wire With Welting in Fiendish Red uses the same great Electroluminescent Wire that Electric Optics is known for...
Special Price $1.35 was $1.89
Availability: Out of stock
SKU
EO22RDW
Add to Wish List Add to Compare
Email
Skip to the end of the images gallery

Skip to the beginning of the images gallery
Details

Electric Optics EL Wire With Welting in Fiendish Red is a fantastic new color of Welted EL Wire, and uses the same great Electroluminescent Wire that Electric Optics is known for. The Welting extends off the wire approximately 1/3 of an inch, which makes it great for sewing into fabrics or gluing to accessories. The plastic welting comes in the same color as the wire, and offer maximum durability without sacrificing on brightness. If you would like us to add a custom connector for you click here.

Why is the latest Generation in EL Wire better than the previous?
Over Twice as bright as Gen 2x
Longer Lifetime and lower operating voltage, meaning less battery power lights up more wire
The 2010 Electric Optics EL Wire also has better bending resistance and more durable than the 2006 Generation (2x). The 2006 had a shelflife of approximately 2 years. Don't get us wrong, we loved the previous generation, and still have some laying around... But this is better, brighter and easier to work with!
Other colors include: Brilliant Pink, Lavender White, Charged Orange, Citron Yellow, Pistol Purple, Bawdy Blue, Magnetic Green, Lucky Green and Fiendish Red 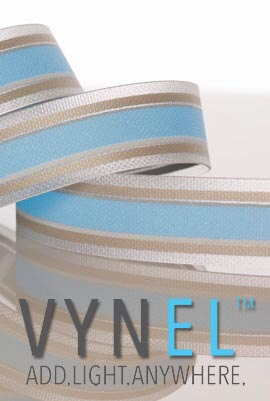